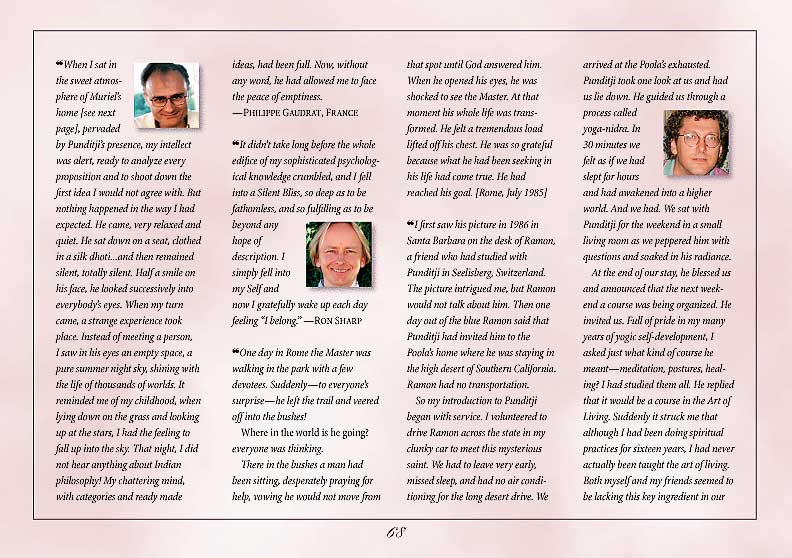 When I sat in the sweet atmosphere of Muriel’s home [see next page], pervaded by Punditji’s presence, my intellect was alert, ready to analyze every proposition and to shoot down the first idea I would not agree with. But nothing happened in the way I had expected. He came, very relaxed and quiet. He sat down on a seat, clothed in a silk dhoti…and then remained silent, totally silent. Half a smile on his face, he looked successively into everybody’s eyes. When my turn came, a strange experience took place. Instead of meeting a person, I saw in his eyes an empty space, a pure summer night sky, shining with the life of thousands of worlds. It reminded me of my childhood, when lying down on the grass and looking up at the stars, I had the feeling to fall up into the sky. That night, I did not hear anything about Indian philosophy! My chattering mind, with categories and ready made ideas, had been full. Now, without any word, he had allowed me to face the peace of emptiness. — Philippe Gaudrat, France

It didn’t take long before the whole edifice of my sophisticated psychological knowledge crumbled, and I fell into a Silent Bliss, so deep as to be fathomless, and so fulfilling as to be beyond any hope of description. I simply fell into my Self and now I gratefully wake up each day feeling “I belong.” — Ron Sharp

One day in Rome the Master was walking in the park with a few devotees. Suddenly — to everyone’s surprise — he left the trail and veered off into the bushes! Where in the world is he going? everyone was thinking. There in the bushes a man had been sitting, desperately praying for help, vowing he would not move from that spot until God answered him. When he opened his eyes, he was shocked to see the Master. At that moment his whole life was transformed. He felt a tremendous load lifted off his chest. He was so grateful because what he had been seeking in his life had come true. He had reached his goal. [Rome, July 1985]

I first saw his picture in 1986 in Santa Barbara on the desk of Ramon, a friend who had studied with Punditji in Seelisberg, Switzerland.

The picture intrigued me, but Ramon would not talk about him. Then one day out of the blue Ramon said that Punditji had invited him to the Poola’s home where he was staying in the high desert of Southern California. Ramon had no transportation.

So my introduction to Punditji began with service. I volunteered to drive Ramon across the state in my clunky car to meet this mysterious saint. We had to leave very early, missed sleep, and had no air conditioning for the long desert drive. We arrived at the Poola’s exhausted. Punditji took one look at us and had us lie down. He guided us through a process called yoga-nidra. In 30 minutes we felt as if we had slept for hours and had awakened into a higher world. And we had. We sat with Punditji for the weekend in a small living room as we peppered him with questions and soaked in his radiance.

At the end of our stay, he blessed us and announced that the next weekend a course was being organized. He invited us. Full of pride in my many years of yogic self-development, I asked just what kind of course he meant — meditation, postures, healing? I had studied them all. He replied that it would be a course in the Art of Living. Suddenly it struck me that although I had been doing spiritual practices for sixteen years, I had never actually been taught the art of living. Both myself and my friends seemed to be lacking this key ingredient in our growth. We returned the next weekend. The Poola’s put us up again as if we were their own children. Our first Art of Living course did not even include the Sudarshan Kriya. However, in those four days the grace of God descended so strongly and sweetly and gently that we all felt like new creatures, with new minds and — most of all — newly expanded hearts.

When Punditji returned the next year, we came to take another course. This time he surprised us with the Sudarshan Kriya. We were speechless. Soon the loving glow and power of the course spread to all our friends. If they would not attend, I simply dragged them in to meet him. Before long the Poola’s warm and hospitable house could not contain the burgeoning expansion of devotees. Punditji began to visit us in Santa Barbara, Los Angeles and San Francisco. The first Advanced Course in California was held in the high desert at Sky High Ranch in April 1988. In his presence we were far higher and wider than the sky.