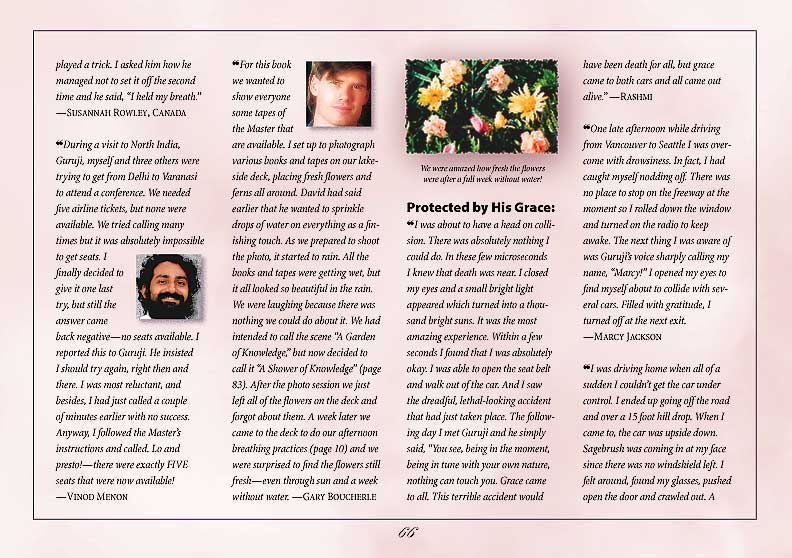 During a visit to North India, Guruji, myself and three others were trying to get from Delhi to Varanasi to attend a conference. We needed five airline tickets, but none were available. We tried calling many times but it was absolutely impossible to get seats. I finally decided to give it one last try, but still the answer came back negative — no seats available. I reported this to Guruji. He insisted I should try again, right then and there. I was most reluctant, and besides, I had just called a couple of minutes earlier with no success. Anyway, I followed the Master’s instructions and called. Lo and presto! — there were exactly FIVE seats that were now available! — Vinod Menon

For this book we wanted to show everyone some tapes of the Master that are available. I set up to photograph various books and tapes on our lakeside deck, placing fresh flowers and ferns all around. David had said earlier that he wanted to sprinkle drops of water on everything as a finishing touch. As we prepared to shoot the photo, it started to rain. All the books and tapes were getting wet, but it all looked so beautiful in the rain. We were laughing because there was nothing we could do about it. We had intended to call the scene “A Garden of Knowledge,” but now decided to call it “A Shower of Knowledge” (page 83). After the photo session we just left all of the flowers on the deck and forgot about them. A week later we came to the deck to do our afternoon breathing practices (page 10) and we were surprised to find the flowers still fresh — even through sun and a week without water. — Gary Boucherle

Protected by His Grace:
I was about to have a head on collision. There was absolutely nothing I could do. In these few microseconds
I knew that death was near. I closed my eyes and a small bright light appeared which turned into a thousand bright suns. It was the most amazing experience. Within a few seconds I found that I was absolutely okay. I was able to open the seat belt and walk out of the car. And I saw the dreadful, lethal-looking accident that had just taken place. The following day I met Guruji and he simply said, “You see, being in the moment, being in tune with your own nature, nothing can touch you. Grace came to all. This terrible accident would have been death for all, but grace came to both cars and all came out alive.” — Rashmi

One late afternoon while driving from Vancouver to Seattle I was overcome with drowsiness. In fact, I had caught myself nodding off. There was no place to stop on the freeway at the moment so I rolled down the window and turned on the radio to keep awake. The next thing I was aware of was Guruji’s voice sharply calling my name, “Marcy!” I opened my eyes to find myself about to collide with several cars. Filled with gratitude, I turned off at the next exit. — Marcy Jackson

I was driving home when all of a sudden I couldn’t get the car under control. I ended up going off the road and over a 15 foot hill drop. When I came to, the car was upside down. Sagebrush was coming in at my face since there was no windshield left. I felt around, found my glasses, pushed open the door and crawled out. A man named Angelo drove me to the nearest town to call the police. When I got back, people were searching through the field, sure that someone must be bleeding to death somewhere in the brush. I said I had been protected — not a scratch on me. One man agreed, noting the audiotapes with Gurudev’s picture that covered the roof of my upside-down car. The car was damaged top, bottom, and all four sides — totalled. I am grateful for his vigilant grace and protection. — Sherri Silverman