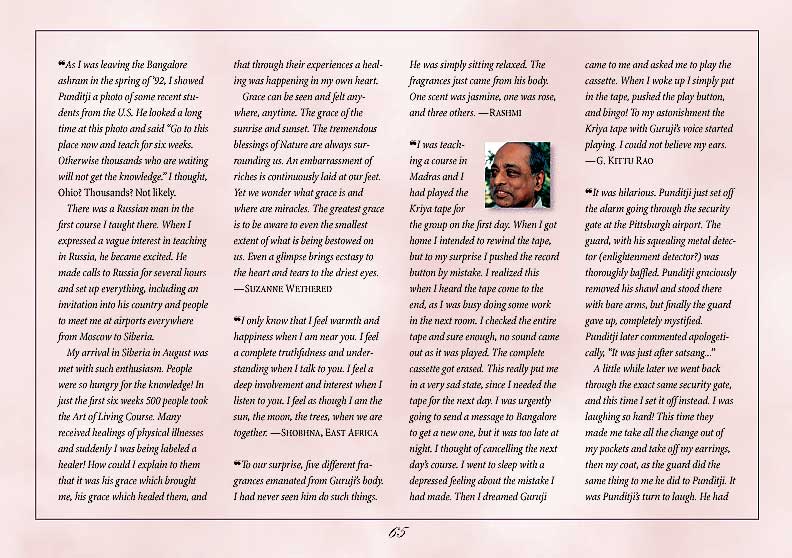 As I was leaving the Bangalore ashram in the spring of ’92, I showed Punditji a photo of some recent students from the U.S. He looked a long time at this photo and said “Go to this place now and teach for six weeks. Otherwise thousands who are waiting will not get the knowledge.” I thought, Ohio? Thousands? Not likely.

There was a Russian man in the first course I taught there. When I expressed a vague interest in teaching in Russia, he became excited. He made calls to Russia for several hours and set up everything, including an invitation into his country and people to meet me at airports everywhere from Moscow to Siberia.

My arrival in Siberia in August was met with such enthusiasm. People were so hungry for the knowledge! In just the first six weeks 500 people took the Art of Living Course. Many received healings of physical illnesses and suddenly I was being labeled a healer! How could I explain to them that it was his grace which brought me, his grace which healed them, and that through their experiences a healing was happening in my own heart.
Grace can be seen and felt anywhere, anytime. The grace of the sunrise and sunset. The tremendous blessings of Nature are always surrounding us. An embarrassment of riches is continuously laid at our feet. Yet we wonder what grace is and where are miracles. The greatest grace is to be aware to even the smallest extent of what is being bestowed on us. Even a glimpse brings ecstasy to the heart and tears to the driest eyes.

I only know that I feel warmth and happiness when I am near you. I feel a complete truthfulness and understanding when I talk to you. I feel a deep involvement and interest when I listen to you. I feel as though I am the sun, the moon, the trees, when we are together. — Shobhna, East Africa

To our surprise, five different fragrances emanated from Guruji’s body. I had never seen him do such things. He was simply sitting relaxed. The fragrances just came from his body. One scent was jasmine, one was rose, and three others. — Rashmi

I was teaching a course in Madras and I had played the Kriya tape for the group on the first day. When I got home I intended to rewind the tape, but to my surprise I pushed the record button by mistake. I realized this when I heard the tape come to the end, as I was busy doing some work in the next room. I checked the entire tape and sure enough, no sound came out as it was played. The complete cassette got erased. This really put me in a very sad state, since I needed the tape for the next day. I was urgently going to send a message to Bangalore to get a new one, but it was too late at night. I thought of cancelling the next day’s course. I went to sleep with a depressed feeling about the mistake I had made. Then I dreamed Guruji came to me and asked me to play the cassette. When I woke up I simply put in the tape, pushed the play button, and bingo! To my astonishment the Kriya tape with Guruji’s voice started playing. I could not believe my ears. — G. Kittu Rao

It was hilarious. Punditji just set off the alarm going through the security gate at the Pittsburgh airport. The guard, with his squealing metal detector (enlightenment detector?) was thoroughly baffled. Punditji graciously removed his shawl and stood there with bare arms, but finally the guard gave up, completely mystified. Punditji later commented apologetically, “It was just after satsang…”
A little while later we went back through the exact same security gate, and this time I set it off instead. I was laughing so hard! This time they made me take all the change out of my pockets and take off my earrings, then my coat, as the guard did the same thing to me he did to Punditji. It was Punditji’s turn to laugh. He had played a trick. I asked him how he managed not to set it off the second time and he said, “I held my breath.”