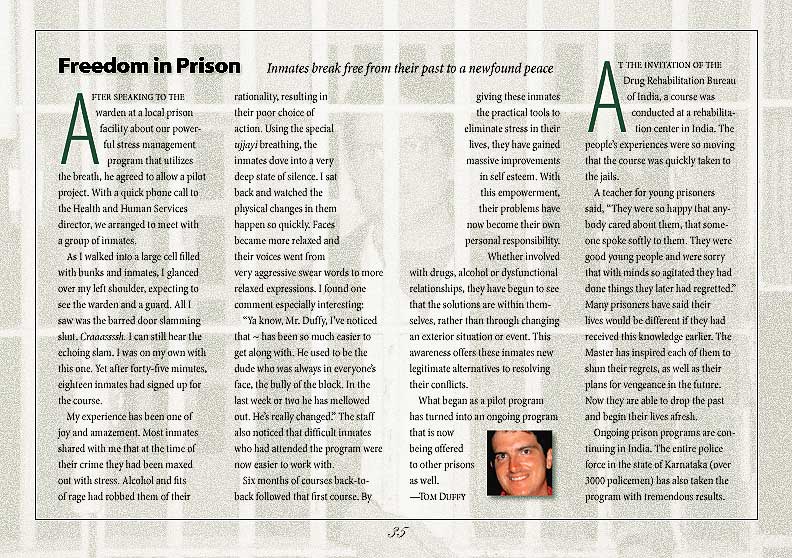 Inmates break free from their past to a newfound peace

After speaking to the warden at a local prison facility about our powerful stress management program that utilizes the breath, he agreed to allow a pilot project. With a quick phone call to the Health and Human Services director, we arranged to meet with a group of inmates.

As I walked into a large cell filled with bunks and inmates, I glanced over my left shoulder, expecting to see the warden and a guard. All I saw was the barred door slamming shut. Craaassssh. I can still hear the echoing slam. I was on my own with this one. Yet after forty-five minutes, eighteen inmates had signed up for the course.

My experience has been one of joy and amazement. Most inmates shared with me that at the time of their crime they had been maxed out with stress. Alcohol and fits of rage had robbed them of their rationality, resulting in their poor choice of action. Using the special ujjayi breathing, the inmates dove into a very deep state of silence. I sat back and watched the physical changes in them happen so quickly. Faces became more relaxed and their voices went from very aggressive swear words to more relaxed expressions. I found one comment especially interesting:

“Ya know, Mr. Duffy, I’ve noticed that ~ has been so much easier to get along with. He used to be the dude who was always in everyone’s face, the bully of the block. In the last week or two he has mellowed out. He’s really changed.” The staff also noticed that difficult inmates who had attended the program were now easier to work with.

Six months of courses back-to-back followed that first course. By giving these inmates the practical tools to eliminate stress in their lives, they have gained massive improvements in self esteem. With this empowerment, their problems have now become their own personal responsibility. Whether involved
with drugs, alcohol or dysfunctional relationships, they have begun to see that the solutions are within themselves, rather than through changing an exterior situation or event. This awareness offers these inmates new legitimate alternatives to resolving their conflicts.

What began as a pilot program has turned into an ongoing program that is now being offered
to other prisons as well. — Tom Duffy

At the invitation of the Drug Rehabilitation Bureau of India, a course was conducted at a rehabilitation center in India. The people’s experiences were so moving that the course was quickly taken to the jails.

A teacher for young prisoners said, “They were so happy that anybody cared about them, that someone spoke softly to them. They were good young people and were sorry that with minds so agitated they had done things they later had regretted.” Many prisoners have said their lives would be different if they had received this knowledge earlier. The Master has inspired each of them to shun their regrets, as well as their plans for vengeance in the future. Now they are able to drop the past and begin their lives afresh.

Ongoing prison programs are continuing in India. The entire police force in the state of Karnataka (over 3000 policemen) has also taken the program with tremendous results.